How do we act, when all the options open to us will result in harm. This piece seeks to acknowledge and accept this dilemma, that there maybe no clear resolution. Yet each one of us – if we are honest – must find the courage to make our choice on how to act, what action to take.  Such is the disturbing nature of antinomy. Carmody Grey the theologian and philosopher underlined this dilemma in her talk on The ethical basis of civil resistance which is worth watching.

An antinomy is a situation in which there are two pulls in different directions on ethical grounds both of which can be seen as equally valid or are apparently unresolvable.

An example of an antinomy is in the tragic scene in the film “The Imitation Game” when having  cracked the Enigma code (during WWII), Alan Turing and the code cracking team realised that they would have to stay silent in their acquired knowledge that Allies ships were to be bombed, in order to avoid alerting the Nazis that they had cracked the code – which gave them a chance of ending the war sooner.  So they “allowed” some deaths in order to preserve the lives of many.

Nonviolent civil disobedience as an example of antinomy.

In the history of nonviolent actions typically they may damage property and endanger or risk the activists but should not endanger anyone else.  We have never before faced the magnitude of the many colliding dangers we are now experiencing from the Climate and Ecological Emergency (CEE).  Given this is increasing the risk of a collision or creating a harmful situation justified and commensurate compared with the risk of inaction (falling into the CEE abyss)?

Some would say no and argue that the ends can never justify the means, that this leads towards the slippery slope that slides into terrorism.

Some would argue that our care and intention to prevent harm and our accountability – so crucial to nonviolence – all demand that we do not compromise on our means.

Some might retreat from the terrible agitation caused by this antinomy by standing back from taking the decision and walking away!  However, in our situation, refraining from acting, i.e. not stepping up, leaves us in a default position that upholds the “purist” or absolute principled position.  Nicolai Hartmann, a philosopher on ethics, argued that to sit on the fence [or try to] in relation to antinomy is unethical: we have to choose.

An antinomy is a situation in which there are two pulls in different directions on ethical grounds both of which can be seen as valid or are apparently unresolvable.

There can be no conclusion – however there is honesty and courage in being willing to step up to antinomy, we are required to make a choice!

To deny responsibility. If we fail to acknowledge and account for antinomy, disavowal, which is a subtle form of denial, can occur.  Rather than outright denying that we might statistically increase the risk of harm being caused, we tell ourselves that it doesn’t matter, or that the risk is negligible, or that we can’t be held responsible – and therefore are not responsible.  This is an ethical problem similar to disavowal of climate change (Sally Weintrobe, Psychological roots of the climate crisis, 2021).

We are responsible for our actions.  We do consider the possible consequences.

Disavowal is a problem for nonviolence, it is a route down the slippery slope that leads to violence, fanaticism, terrorism.  It could manifest as disavowing the increased risk of collisions as just an unfortunate risk rather like “collateral damage” and necessary to serious civil resistance. Disavowal can be expressed as being so invested in keeping the goal in sight that one becomes casual or dismissive about whatever stands in the way of this. This can happen below the radar, which is why we need to be aware, and to accept responsibility for our decisions and actions.

Highly physically disruptive actions are more likely to attract people who tend to make decisions based on thinking/facts (“thick-skinned types”) who tend to “look at the facts without being swayed much by their feelings”. They are also the people most likely to disavow increased risk of collisions.

People who make decisions by drawing from their feelings[1] (“sensitive types”) will tend to be alienated by and/or averse to:

Therefore feeling-types may be less likely to sign up as willing to block motorways.

We need feeling-types to help us keep in touch with our humanity: these are not “just statistics” or collisions that are dwarfed by the magnitude of the CEE; they are real people, each and every life does matter. We need thinking-types to keep a sense of proportion to the situation at hand – the sheer magnitude of loss and damage from the CEE – and our responsibilities to reduce the harm.

The thinking types may be in the mainstream majority of the Civil Resistance movement whereas the feeling types may be marginalised and find it more difficult to be heard.  All this is worth bearing in mind in terms of our group dynamics, to ensure that the voices of feeling types will be heard and acknowledged.

An ethical and a nonviolent approach would be to choose in full awareness of all that is at stake; so disavowal can not happen below the radar of our awareness.  This means willingly acknowledging and engaging with all views and sides of the antinomy without shrinking or reacting defensively, or coolly reducing the information to “just facts”.  It means entertaining the possibility that we might be wrong, or not absolutely pure in our methods. We don’t need to have all the answers to take action: the action is a dialogue and creates dialogue out of which answers will emerge from all sides.

Why is all this important?

By being fully aware of all that is at stake we are less likely to become casual or thick-skinned or dishonest about any harm we risk causing.  We are less likely to cause actual harm through the carelessness that can result from disavowal.  It also means we will be ready and able to respond with measured composure (and/or confident feistiness!) to claims by media that we have caused a crash.

Thoughful article on the myth of blocked ambulances – https://bylinetimes.com/2022/10/26/the-myth-of-the-blocked-ambulance/

Footnote:   [1] This reference to feeling-types and thinking-types is based on the Myers-Briggs personality types system (MBTI).  You can take a free test here – very useful! https://www.16personalities.com/free-personality-test 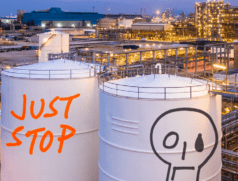