Two of the three Just Stop Oil supporters, who appeared at Birmingham Crown Court today, were acquitted while a third was given a fourteen day sentence suspended for 2 years for demanding that the UK government end new oil and gas projects in the UK.

The three Just Stop Oil supporters were charged with breaching an injunction granted to North Warwickshire Borough Council on 14th April. The private injunction gives sweeping powers of arrest to the authorities and appears designed to help the state protect the profits of the oil industry by effectively outlawing any protest activity near the Kingsbury Terminal, the largest inland oil storage depot in the country.[1]

The three, Stephanie Aylett, Sean Irish and Callum Goode took part in actions outside the Kingsbury Oil terminal from 23rd August and occupied a tunnel under Piccadilly Way, a key tanker route to the terminal.

On 24th August, Judge Kelly, who was also presiding today, threw out 11 similar cases of breach of the Warwickshire injunction having accepted that the injunction did not in fact extend to the roads in question. 25 people from Just Stop Oil have already spent time on remand in police cells and in prison this year as a result of actions taken at the Kingsbury Oil Terminal.

Stephanie Aylett, 28, from St Albans who was one of the people acquitted today said:

“We are staying strong and resolute in our demand that this government immediately halts all new licenses and consents for new oil and gas projects, because oil is killing us. When a government is failing in its primary duty to protect its citizens we have every right under British law to defend ourselves and our communities.

“Join Just Stop Oil on the 1st October in Parliament Square with many other movements. Thousands of us will come together to resist because we’ve had enough of the cost of living crisis, the climate crisis and these corrupt, lying politicians who care more about profits than people.”

“The new prime minister wants to approve over 130 new oil and gas projects by 2025. This amounts to mass murder of the poor and vulnerable everywhere. The government has also U-turned on fracking for gas- the most destructive source of fossil energy there is. We have to stop them and that is exactly what we are planning to do.

“I am not deterred by the authorities’ attempts to punish me for taking peaceful action. It makes me more determined than ever. Join us, it’s time to step into civil resistance to defend your community.”

As the government doubles down on fossil fuel energy by “ramping up supply” and breaks its manifesto commitment on fracking, Just Stop Oil supporters will continue to take nonviolent direct action to demand an end to this genocidal death project. We accept the consequences of our actions and we don’t need you to feel sorry for us, we need you to step up and join us.  [2] [3]

This is the moment to come together and resist. We are not prepared to just watch while they destroy everything we love. We’re done with begging. Voting has changed nothing. We are going to stop new oil whether those in power agree or not. As citizens, as humans, as parents and children we have every right under British law to protect ourselves and those we love. This is the moment, we are the last generation that can solve this. Will you step up and join us? If we all come together we can do this. We can Just Stop Oil. Join us on October 1st in Westminster. 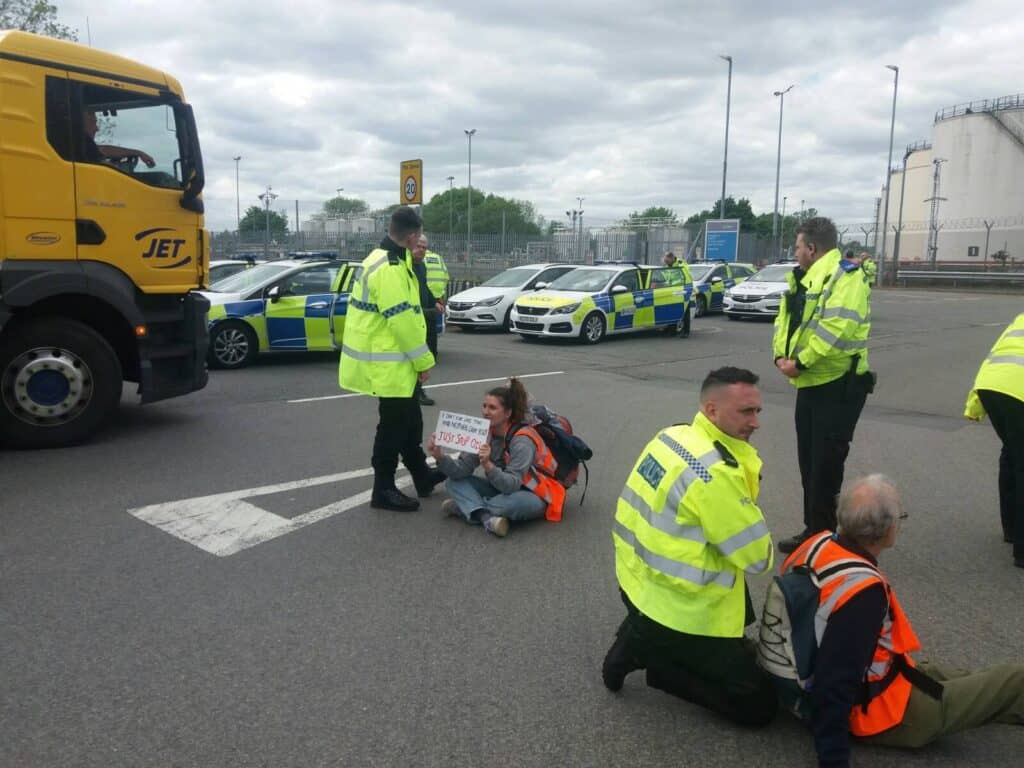